We’re proud to announce the close of its 2018 hackathon, AgHack, held between the 27th and 29th of July 2018 at Spacecubed in Perth CBD.

The Hon. Dave Kelly MLA, Minister for Water; Fisheries; Forestry; Innovation and ICT; Science, opened the event on the first evening and gave a supportive speech for the participants about to start the problem-solving weekend.

After three days of intense collaboration, the eleven teams presented their unique solutions to their chosen challenge in a three-minute pitch. Those present at the pitch event also enjoyed an encouraging speech from the Hon. Alannah MacTiernan MLC, Minister for Regional Development; Agriculture and Food. The Minister leads AgHack’s key government sponsor, the Department of Primary Industries and Regional Development (DPIRD).

The teams competed to win a number of prizes, including $5,000 in cash prizes and free co-working space.

The winners for each of the available prizes were announced on the afternoon of Sunday 27th July 2018 after the careful consideration of the judging panel. The judging panel included: Dr Mark Sweetingham from DPIRD, Darren Gibbon from DPIRD, and Darren Hughes from Grains Research and Development Corporation (GRDC). 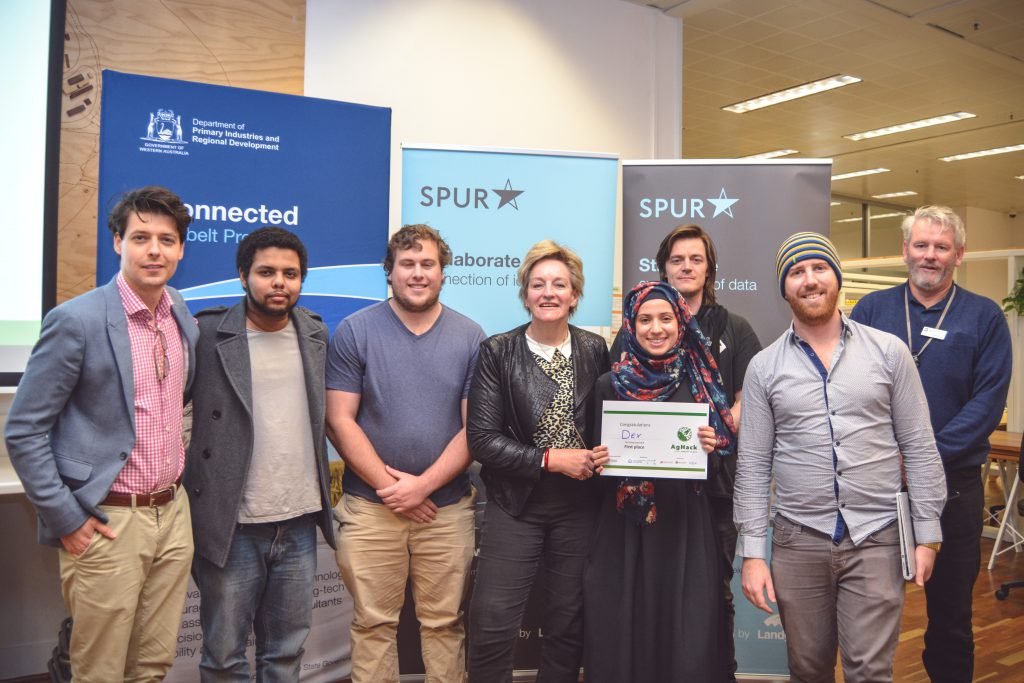 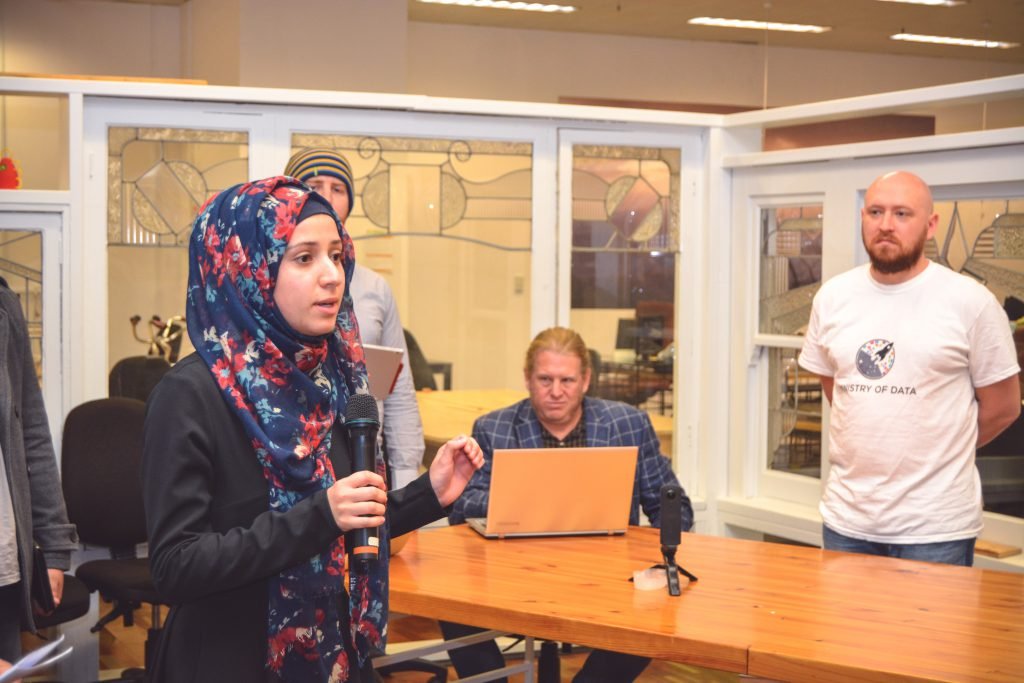 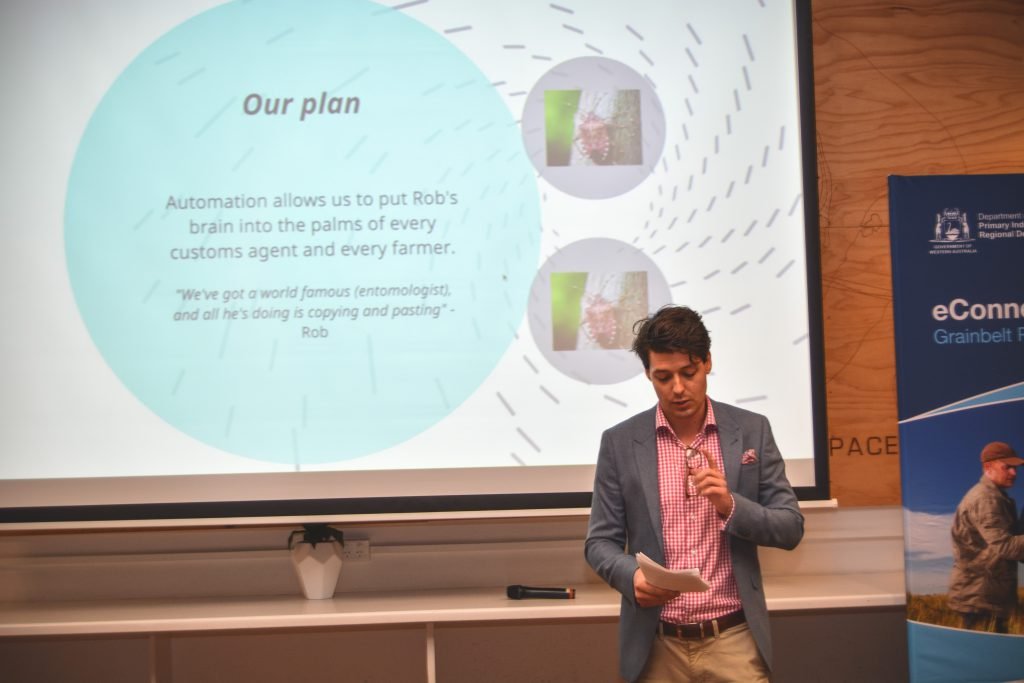 Dex tackled the challenge, ‘Identifying and predicting pests to protect WA’, where they presented a prototype of an application that can immediately identify an insect and flag whether it poses a threat to Australia’s biosecurity. The App works using machine vision and machine learning technologies, and can be equipped to customs officers and farmers, for example, to take protective measures. 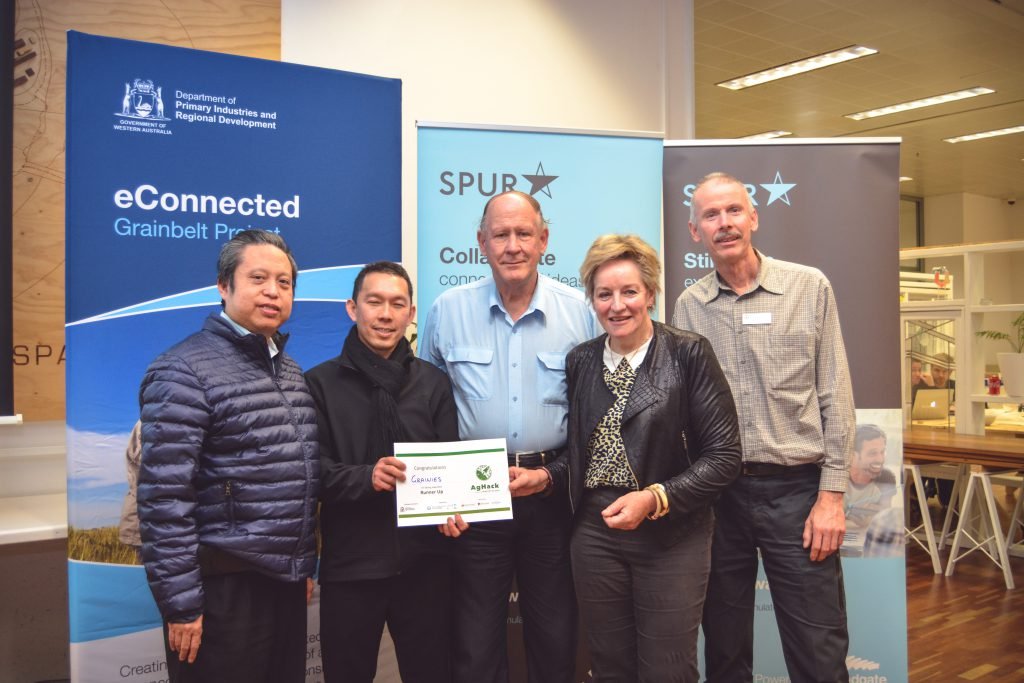 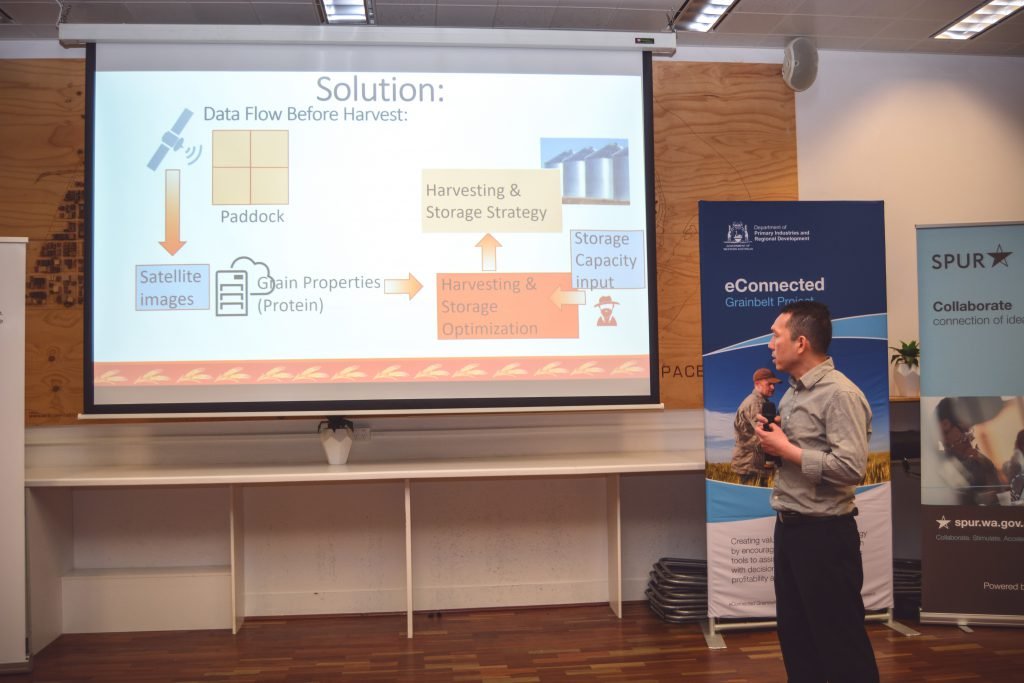 All members of the Grainies team met on the first night of AgHack. A diverse group of professional entrepreneurs and newbies, Grainies tackled the ‘Whose grain is that’ challenge and developed a concept for how to track grain from farmer to customer.

Carbon Eyes in the Sky 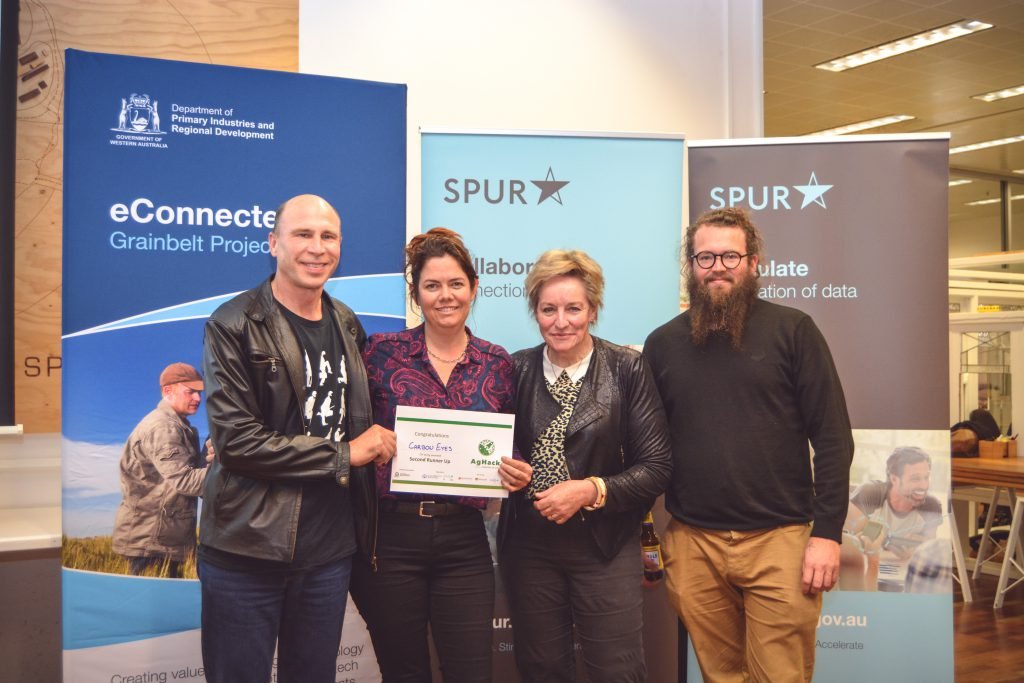 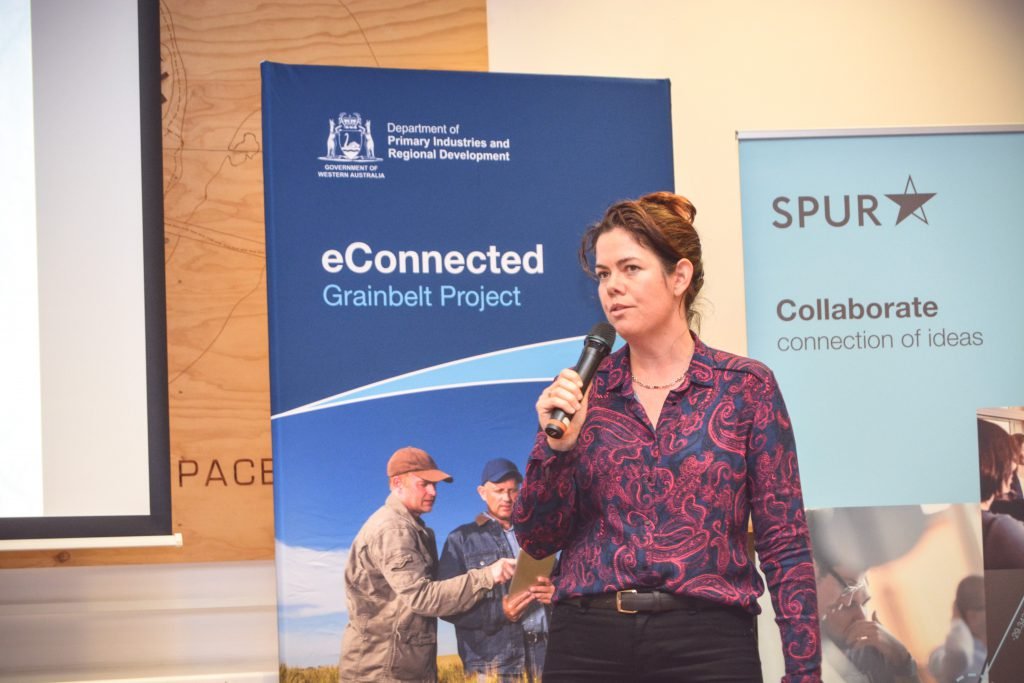 Carbon Eyes tackled the ‘Monitoring the Rangelands’ challenge and saw an opportunity to apply their existing ideas to help DPIRD. Using satellite imagery Carbon Eyes assesses the potential of the rangelands for carbon sequestration and use. 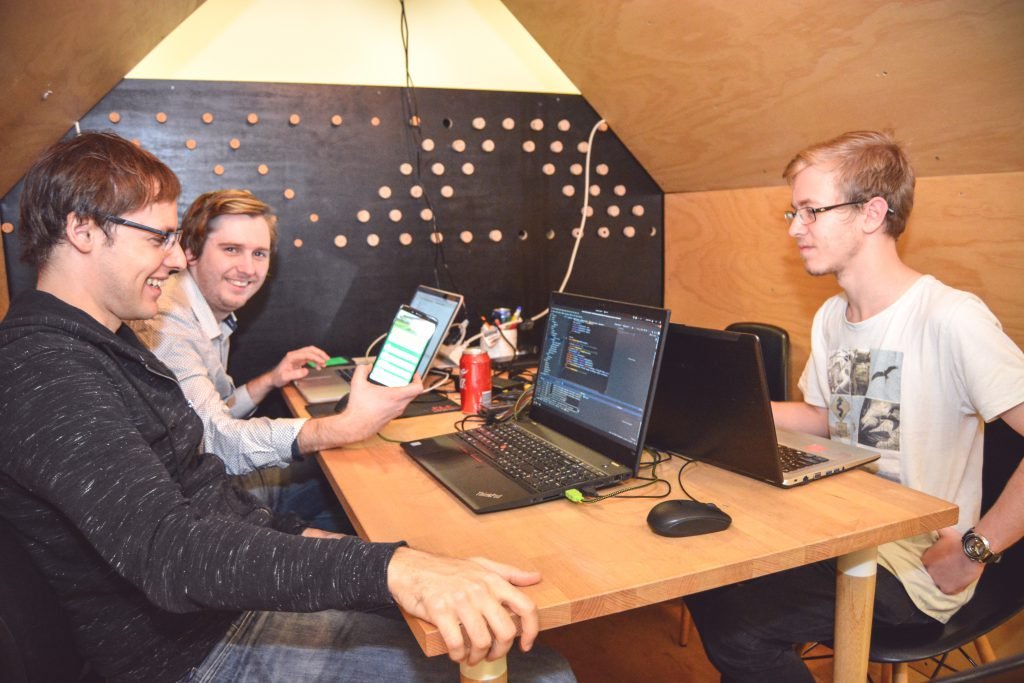 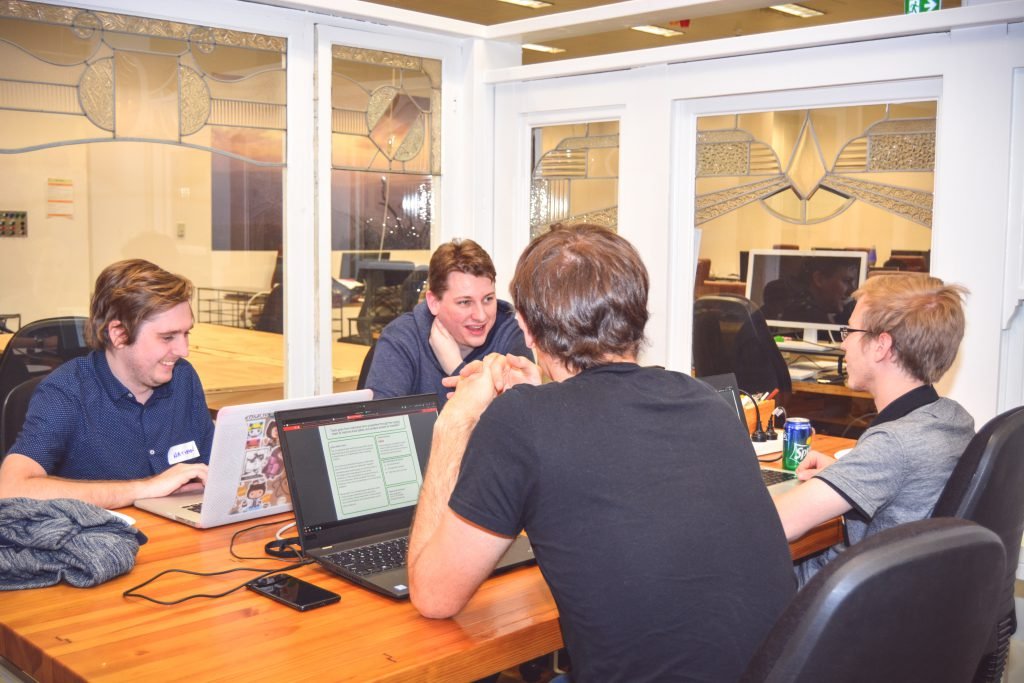 With a team of experienced and fresh hackathoners, Ag-Dex tackled the ‘Connected sheep’ challenge and won the Best Young Team award at AgHack. Over the course of the weekend, the team built a prototype Bluetooth sensor which farmers could use to Connect Their Sheep and monitor and measure ewe’s and their lamb’s health and behaviour.

Together with the WA Department of Primary Industries and Regional Development (DPIRD), we have endorsed the presented challenges for their relevance and value to the industry – giving them market for commercialisation from the start.

Grading grain at the farm gate

How might we better: grade and sort grain on the farm before the point of delivery to maximise the return for farmers?

Where did my lamb chop come from?

How might we better: track and provide feedback to lamb producers and processors to maximise price and customer satisfaction of meat?

How might we better: monitor the condition, health and usage of WA’s remote rangelands??

How might we better: link ewes and lambs on the farm to prevent them being stressed when separated, and connect breeding and productivity data to make better breeding decisions?

How might we better: detect pests through photographic evidence to improve WA’s biosecurity?

Whose grain is that?

How might we better: track grain from individual farm properties through the supply chain to improve food safety and protect access to markets?

What to grow and when

How might we better: choose the best cropping mix to optimise long-term land sustainability with seasonal economic return?

How might we better: collect and collate farming data from different sources in different formats to enable better decisions and precision agriculture?

The event and its participants enjoyed a number of useful and insightful datasets provided by SPUR powered by Landgate.

DPIRD eConnected Grainbelt Project’s Applications Programming Interfaces (APIs) opened up during the Hackathon event, available for participants to work with during the event. The eConnected technical team developed six APIs, two of which have already been released – the Weather API and the Radar API.

DPIRD are providing this data through a shared collaboration with the Bureau of Meteorology (BoM). This API provides users with rainfall estimates at a 1km2 resolution for the areas of the Grainbelt covered.

The remaining four new APIs are expected to be announced/ launched at the “Hackathon Challenges Launch Party”. If a Minister attends then the plan is to ask if they can announce the four new APIs in their speech. The four new APIs include – Soils, , Science and Organisms APIs.

This API looks at the different percentages of ‘soil supergroups’ that are likely to be in a certain area. The API provides an aggregation of the soils, as to what soils are likely to be there.

MyPestGuide lets you quickly identify pests and report your observations instantly to the Department of Primary Industries and Regional Development (DPIRD).

This API provides the ‘back end’ to the Rainfall to Date, Potential Yield, and Soil Water tools already available on the DPIRD website.

This API will open access to The Western Australian Organism List (WAOL), which provides the status of organisms which have been categorised under the Biosecurity and Agriculture Management Act 2007 (BAM Act)